Which Meridians Can Be Injured If Over-using Mouse? How To Self-prevent It And Self-heal This Injury?

Once I was an IT professional. I still use the computer a lot right now (8-10 hours daily). Since my right wrist became painful when I was going through “Qi’s strike on focuses (lesions)“, I have studied the wrist pain caused by overusing mouse and would like to share with you.

In my experience,  the pain caused by mouse over-use is located in the black-circled area as shown in the following image: 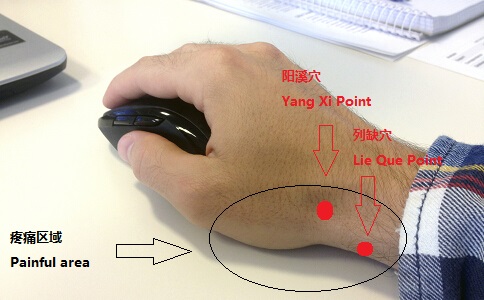 In this area, 2 points are the most painful: one is Yang Xi Point on Yangming Large Intestine Channel of Hand, another is Lie Que Point on Taiyin Lung Meridian of Hand. The details are explained as follows:

Yang Xi Point’s five-element character is fire. It is important for supplementing and boosting the Yang Qi on Yangming Large Intestine Channel of Hand. When the Qi is seriously stagnated at Yang Xi Point, it has a serious impact on the whole Yangming Channel. When Qi’s stagnation happens seriously at Yang Xi Point, it usually indicates that some other points on Yangming Channel also may have problems. In the first several months of meditation, I not only could feel the Qi’s repairing at Yang Xi Point but also feel the repairing at the other points, especially Jian Yu Point,  Ju Gu (great bone) Point, and Fu Tu Point.

The problems of these several points could also cause problems on the channel where themselves are located – Yangming Channel, e.g., constipation. As mentioned above “Yang Xi Point five-element character is fire. It is important for supplementing and boosting the Yang Qi on Yangming Large Intestine Channel of Hand“, the Yang Qi deficiency on Yangming Channel cause gastrointestinal motility deficiency. Thus it could cause constipation.

Lie Que Point is the Luo-connecting point of Taiyin Lung Meridian of Hand. It is also an eight confluenence point (connecting to Ren meridian). The function of Lie Que Point is resolving exterior, opening the inhibited lung-energy, clearing and activating the channels and collaterals, and promoting Ren meridian.

The problems of Lie Que Point can impact the functions of the lungs.

3. How to self prevent and self heal this pain

This is my personal opinion on this topic. Your comments are welcome.

Disclaimer: This article serves as a regimen reference only and is not a medical guide. If you have diseases, please see doctors or visit medical institutes.
All right reserved. If reprinted, the source link should be clearly shown.
Xia’s Meditation - The fact speaks for itself
×Scan to share with WeChat