How my neck pain was healed by meditation (i.e. how Xia’s Meditation was born）

My neck pain started at the beginning of 2005 when I was 37. I was an IT professional and used computers a lot, both at work and at home. Meanwhile, I also felt the work was very stressful. Because the neck pain was getting worse, my mood was getting worse with each passing day. I had a very serious relationship problem at work and did not get along with my boss, my coworkers.

In the summer of 2005, I heard of that swimming is good for the neck. I went to the YMCA and registered a membership. I was not good at swim at all. So, what I did was only dog paddle in the YMCA. My head was straight and stiff when I was swimming This actually hurt my neck a lot and made it worse. About 1 month after I started swimming, one day I felt a neck muscle was very painful after coming back from the YMCA. I knew that there was something wrong and stopped swimming (I still believe that swimming is good for neck if you are a good swimmer - what caused my problem is the way I swam, not the swimming itself)..

At a night in October 2007, I was at home. Right after I stood up at the computer desk and wanted to go to the kitchen, I felt an indescribable panic and then it likes that a thin blade was cutting my throat thwartwise. This gave me a big pain. Since then my neck pain has gotten worse abruptly, but I did not know what was really happening on that night. Sometime later when I saw a chiropractor and he asked me whether I had experienced “a pain like a blade is cutting the neck thwartwise". My answer was "yes". Then he told me this means the disc was broken.

At the end of 2006, I was not able to drive to other cities (or anywhere with more than 30 minutes driving distance). I was barely able to drive to work since it was just 15 minutes driving. I started having a serious problem in taking care of myself. I could not drive to the supermarkets any time I want - I have to wait until a "good day". From this point, I started seeing doctors.

First, I saw several acupuncturists. Unfortunately, it did not work for me.

The first acupuncturist is a Chinese doctor in Toronto. He had been a department deputy head of a hospital in China before going to Canada. My neck problem was not improved by this doctor at all.

The second acupuncturist is in Toronto as well. His ads were very exaggerating and made him like a miracle-working doctor. His needles were energized by electric. My neck could not take it at all. I ran away from his office only after several minutes of treatment.

The third one was a TCM bone-setting doctor in Markham. It did not work for me.

The fourth one was a Markham lady acupuncturist. I was really impressed by the reviews about her. It did not work for me, either.

After seeing these four TCM doctors, I started to see a chiropractor for about six months. I knew that I was very close to paralysis and any carelessness could bring a disaster (see this video "Sandy Nette's Story" for an example). The chiropractor knew that, too. I could see he is very experienced in the sense that he was very careful when doing the neck adjustment - never did anything challenging on my neck. Even though he was careful like this, a disaster still almost happened to me 6 months later. After a  chiropractic session that day, I lost sensation on my right foot totally when driving home. This means I could not brake and the car was not under controlled at all. It lasted several minutes and then the sensation was recovered eventually. I was lucky that there were no other vehicles during these several minutes. I had to stop seeing a chiropractor since then.

February 2007 is the time when my neck pain progressed very fast. For a whole month, I almost did not sleep. Occasionally, I might be able to "sleep" for 2 to 3 hours, but the sleep was so light that I was aware that I was sleeping during sleeping. On February 4th, I drove around 600 KM from Cambridge, Ontario to Barberton, Ohio for a week's training. At that night, I run 2 red lights in a row in Barberton. At one intersection, I run the first red light. When I have realized this red light running, I run the second red light at the next intersection. From this you can not my mental status is not very good since driving 1200 KM (to and from) after not sleeping for several days itself is a very unwise decision. I run the red lights at full speed ( 50 miles/hour or so). So, if a car accident had happened to me, it would have been a deadly one. I felicitate myself for being so lucky when I think of this experience today. After one week's training, I drove another 600 KM back home.

In a morning in April 2009, I had to return home halfway driving to work since I could not look back and did not have the energy to control the steering wheel. I used 3-week vacation in the hope that the neck pain could be eased and then go back to work. But I could never go back to work since then. From this point on, I could not drive, could barely walk (the most 50 meters). In October, the company I worked for terminated my employment and I lost my income.

From April 2009 to the end of March 2011, I almost never walked out of my home door. Most of the time I was too weak to pick up a phone call or take a shower. The longest I did not take shower for 2 months. I was very depressed because of long term neck pain. Several years later, one of my friends told me that I just opened the door a little after he rang the bell. I lost some sensation because of neck pain. Once my the base of my left thigh was rotten. There were some pus and blood around it, and it stunk. But I was not aware of it since I lost sensation. I thought the stink was from the garbage in the garage.

I almost could not do anything, including swatting a fly. During summertime, there were maggots on the kitchen floor and at least several hundred flies were flying around in the house.

At the end of 2010, I thought that all my money was running out. I still remember the day when I thought I had no money and wanted to commit suicide. My face was hot, my heart was beating fast, I was totally at a loss and full of the terror of death. I sat on the stairs and kept thinking for about half an hour: thinking about how to commit suicide, where I would go after death, how sad would be my parents...This is when I was closest to death in all my life. During those days, I had suicidal thought every single day, but I never really thought of how to implement it like this time.

That day I suddenly realized that I had another credit card with $5000 CAD credit limit. Then I used a cash advance to get through it for the time being. But it was only good for several months - my house mortgage itself is $1320 CAD/month.

At the end of April 2011, my house was sold and the financial problem was fixed.

I tried quick walk for exercise from June 2011 to the end of 2013. My neck pain was getting better for some time. I could even drive for 4 years although it was always still challenging to me. During that period of time, I walked 15-20 KM per day on average. One day, I walked for 7 hours and the millage was a marathon.

During the period from 2004 to March 2018, I was very close to death: 1. physically, I could be paralyzed, get a stroke or sudden death any time. I had to be very careful even when I was sneezing in case it changes into a disaster. I had near-death experience for several times. 2. psychologically, long term neck pain made me very depressed. I had suicidal thoughts every single day during this period of time.

During this period of time, I tried 2 kinds of Qigong (one is TCM qigong while another one is stake-standing exercise. None of them works for me.

From the beginning of 2014, I started to explore creating my own meditation method to save myself. I read a lot of Chinese traditional Taoism books and practiced to see the effect.

During about 4 years, I tried all kinds of essentials to make the best combination. I tried 149 versions before the finalizing the method design. I am lucky enough there are a lot of resources from Chinese traditional regimen treasure-house which I can study, try and improve. Finally, I succeeded in 2018. After 9-month practice, I was healed miraculously.

On Oct 1st, 2019, Xia's Meditation will be launched officially. The meditation method features "safety" and "ease". It opens a new era of traditional Chinese regimen.

It has been found that Xia's meditation is the crown of regimen and its healing effect for chronic diseases is second to none.

The characters of Xia's meditation: 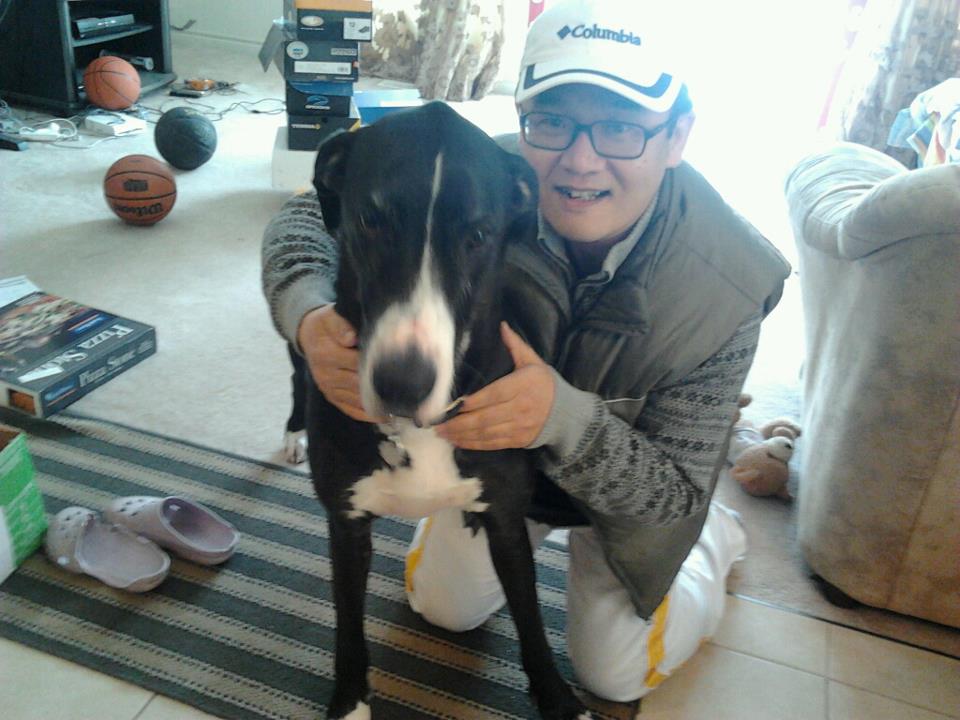 Some words regarding this photo.

This photo was taken during this period of time:

I tried quick walk for exercise from June 2011 to the end of 2013. My neck pain was getting better for some time. I could even drive for 4 years although it was always still challenging to me. During that period of time, I walked 15-20 KM per day on average. One day, I walked for 7 hours and the millage was a marathon.

But everybody else thought I was in good shape and should be able to work:

About 3 months after I started walking exercise, I wanted to rent a room. The landlord checked my financial status. I told him that I did not have a job since I could not work. He was so surprised:” you look very healthy!”.

I had a friend who helped me a lot when I was in trouble. But he still did not understand my sadness beyond words. He persuaded me to find a job, instead of sitting idle and eating. I was the only person who really knew that I could not work.

I could barely drive. For once, I was almost running into an accident when changing lanes.

I still remember that sometimes I stopped in the snow and looked up to check if my neck was still painful. But the cruel reality struck me again and again. No one could understand this sadness unless he suffers from a chronic disease.

I suddenly understand why I was not healed until the day I read “Qi is the commander of blood”. Qi is at a higher level than blood, Eventually, it is Qi which controls blood, not vice versa.

Then I realized that the exercise at blood level would never fix my neck problem. I had to find a solution at Qi level.

I started my long journey to study and practice meditation since then.

Xia’s meditation is only a regimen practice and is not a medical institute. We don’t promise anyone the healing of any diseases.  If you have diseases, please see doctors or visit medical institutes which are permitted by the government for medical help and follow your doctor's advice.